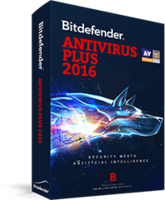 Bitdefender Antivirus Plus 2016 builds on technology awarded by AV-TEST Best Protection for three years straight, and Best Performance for system speed. It is exceptionally easy to use. It detects when you are working, playing, or watching movies and prevents apps from popping up or slowing down your system. OneClick Optimizer frees up the hard disk space and performs registry repairs and privacy clean-up. On top of unrivaled antimalware protection, BitdefenderAntivirus Plus 2015 shields your online banking and shopping with Bitdefender Safepay a unique, secured browser. It also shortens the buying process, by auto-completing credit card details from your Bitdefender Wallet.

Bitdefender Antivirus Plus 2016 is a versatile and comprehensive security suite. With the new Profiles and Autopilot, the app seamlessly switches between work and play and makes sure you’re not interrupted by security scans or settings tweaks. Bitdefender Antivirus Plus 2016 is less intrusive and has more options, quietly protecting and optimizing your PC without making a lot of demands on you.

Clean UI: Bitdefender’s user interface features a menu that is both stylish and functional. The interface pairs well with Windows 8’s design and makes Antivirus Plus easy to navigate.